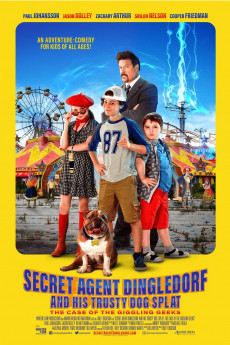 Comedy / Family Bernie Dingledorf is an average 10-year-old in an average town living an average life . . . with one minor exception: Only he can save the world. Contacted by T.W.I.T., a spy agency so secret it doesnt exist, Bernie and his friends-Lens Cap, a director who wants to win her first Oscar by age 13, I.Q. who definitely got his name by accident, and Splat, the canine eating machine - are hurled into one hilarious obstacle after another in their attempt to stop the evil genius, Dr. Chuckles, from firing his diabolical Laugh Generator which will send the entire world into fits of uncontrollable laughter. Armed with only their wits and items from T.W.I.Ts spy backpack (cell phone socks, banana peel launcher, human remote control, and compulsory dancing disco ball) assigned to them by Agent 001/2 - our heroes must infiltrate Dr. Chuckles headquarters, fight off Wing Nut and other clown goons to destroy the Laugh Generator and convince Chuckles to use his genius for good . . . while all the time learning invaluable lessons of honoring one anothers differences and realizing that no matter who we are, God doesnt make junk. Based on the book series by the same name, Secret Agent Dingledorf and His Trusty Dog, Splat is a live action, comedy/adventure that subtly weaves in themes of self-esteem and respect for others.